'Yorkston/Thorne/Khan is one of the most inspired and inspirational cross-cultural acts to emerge this decade&#8203;' Ken Hunt

Yorkston Thorne Khan&#8203; began life when Suhail Yusuf Khan met James Yorkston backstage at a small festival show in Edinburgh. They got talking about music and their respective instruments and began jamming together there and then. They enjoyed it so much, they decided to take the backstage spontaneity onto the stage that very evening. Suhail and James became firm friends and after this would hook up for shows whenever Suhail was in the UK.

“Throughout, this is the sound of three world class talents raising their respective games, as if trying to keep up with each other, creating something far greater even that the sum of their world-class parts.” fRoots

MOJO “Spits in the face of normal genre classifications...Enlightened and challenging, an Incredible String Band for a brave new world”

Songlines “50 years ago the Incredible String Band emerged from the Scottish folk scene to create an extraordinary fusion of folk, acoustic pop and world music that was so singular, idiosyncratic and inimitable that the spirit of it’s magical, wide-eyed wonder has never since been matched. Until now perhaps, for this inspired Yorkston Thorne Khan teaming operates within a similarly eclectic and free-wheeling orbit”

Their second, ‘Neuk Wight Delhi All-Stars’, has been received equally well. Released by Domino on April 7t&#8203;h&#8203; 2017, it represents a confluence of currents, among them the north Indian sarangi; jazz-tinged bass, reminiscent in places of Danny Thompson; acoustic guitar that owes a debt to Elizabeth Cotton, Dick Gaughan and Mississippi John Hurt; and three very different vocalists. The combination is unusual: YTK’s Everything Sacred, released in 2016, may be the only precedent. Yet while, on paper, the constituent elements might seem disparate, the new album is, if anything, even more coherent than its predecessor.

UNCUT “Not so much fusion as a cross-cultural collision”

Soundblab &#8203;“The rivers of musical currents run deep and pure as Scottish and Indian languages, swap sounds of sorrow with universal understanding”

MOJO “The sound they conjure up is Heavenly” 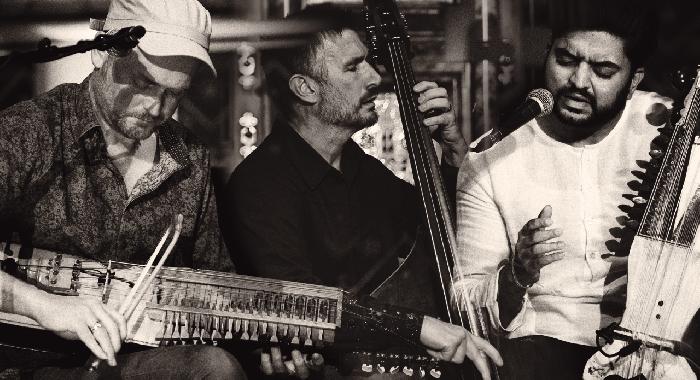