T.I.E.S. Scullion and Friends with special guests to be announced

Together in Electric Streams is a movement. It’s a partnership. It’s a collective. In a year where musicians and arts workers have been to the brink and back, Together in Electric Streams gives you the power to support your local artists, promoters and venues - all while enjoying the highest quality livestream shows, featuring your favourite artists performing in a unique studio setting at one of Dublin’s most beautiful and highly-spec'd music venues, Lost Lane. Together in Electric Streams has brought together a melting pot of all of the crucial components that go into producing broadcast-level streams to create a business model that supports Irish sole traders and businesses. From production, to venue, to ticketing - and, of course, the artists - we have come together to create an intimate live-stream experience for you to enjoy at home without compromising on quality. The Together in Electric Streams line-up is an exciting, genre-spanning programme of events featuring interactive live shows that viewers at home can interact with through chat, sending messages directly to the artists on stage, all while enjoying the highest quality in sound, lights and production. Our ticketing system was also conceived with supporting independent artists, promoters and venues in mind. You can support your favourite artist as well as local venues and promoters even further by purchasing your Together in Electric Streams ticket from them - using their unique ticket link and guaranteeing them a percentage of sales. Scullion has always been a coming together of different musical strands and traditions. The mainstay of the band was and is Sonny Condell. Sonny writes music and songs that are powerful, poetic and soulful. He is one of Irelands most enduring creative artists and along with guitarist Robbie Overson and vocalist Philip King, creates the signature sound of Scullion. Scullion grew from a chance meeting in the late 70’s of its two founding members Philip King and Sonny Condell. Sonny and Philip have not so much floated as careened below the radar for over three decades now. Though never quite cementing themselves as mainstream hitmakings, beautifully crafted songs such as Carol, Down in the City and Eye lids Into Snow have endured as timeless, emotive songs that have made lasting impressions on the listener. Of the band right now, Sonny has noted that “The band never stopped, we just have some periods of intense rest! Philip is a successful film maker and broadcaster and produces Other Voices and I have my own band and recording career, and Robbie plays music the world over, so we just come together when the time is right.” Scullion come together for a one off very special show with Together in Electric Streams sharing songs, stories and poetry, as always with some very special guests to be announced soon, live and direct into your living room. 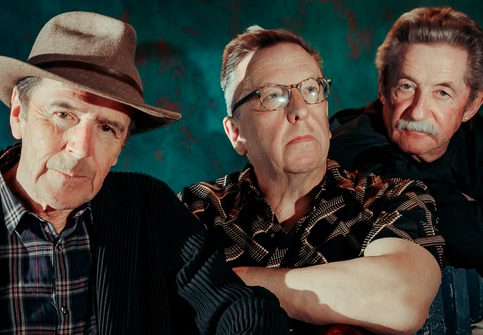