Together in Electric Streams is a movement. It’s a partnership. It’s a collective. In a year where musicians and arts workers have been to the brink and back, Together in Electric Streams gives you the power to support your local artists, promoters and venues - all while enjoying the highest quality livestream shows, featuring your favourite artists performing in a unique studio setting at one of Dublin’s most beautiful and highly-spec'd music venues, Lost Lane. Together in Electric Streams has brought together a melting pot of all of the crucial components that go into producing broadcast-level streams to create a business model that supports Irish sole traders and businesses. From production, to venue, to ticketing - and, of course, the artists - we have come together to create an intimate live-stream experience for you to enjoy at home without compromising on quality. The Together in Electric Streams line-up is an exciting, genre-spanning programme of events featuring interactive live shows that viewers at home can interact with through chat, sending messages directly to the artists on stage, all while enjoying the highest quality in sound, lights and production. Our ticketing system was also conceived with supporting independent artists, promoters and venues in mind. You can support your favourite artist as well as local venues and promoters even further by purchasing your Together in Electric Streams ticket from them - using their unique ticket link and guaranteeing them a percentage of sales. The Zen Arcade The Zen Arcade are a garage rock band from Cavan, Ireland who released their debut single “Don’t Say A Word” out now. To Celebrate they have released a brand-new video to go along with the track, you can check it out here. Speaking about the video shoot Pete O’ Halnon says: “The video was shot in a shed, stars the band, abuses a projector and was directed by a tripod. It showcases the latest in digital regression and artfully combines the bare minimum with low light, undoubtedly inspiring the inevitable low-resolution revolution.” Coming in at 2 minutes, 30 seconds, “Don’t say a word” is an exercise in simplicity, intended to reflect the band's approach to polite conversation. The band express how “Don’t Say A Word is a mantra for the muted millions. Time now for the monosyllabic among us to rise up and remain silent!” Bitch Falcon Bitch Falcon; a name you won't forget and a band who won't let you forget them. This trio from the vibrant, much-hyped music scene of Dublin was formed by front-woman Lizzie Fitzpatrick with her friends in a small kitchen in the city in 2014. Since these freshman days, the lineup has galvanised around the rhythm section of Barry O'Sullivan on Bass and Nigel Kenny on Drums. Bitch Falcon's debut album ‘Staring At Clocks’ is OUT NOW! Formed in Late 2019 and comprised of 3 ex-members of The Strypes whose stellar rise saw them tour 3 critically acclaimed albums all over from Glastonbury to Fuji Rocks and feted by all from Jools Holland to the Arctic Monkey before calling it quits. The Zen Arcade likes to do it differently and birthed a podcast series and multiple fanzines before making a record but it’s been the right move. 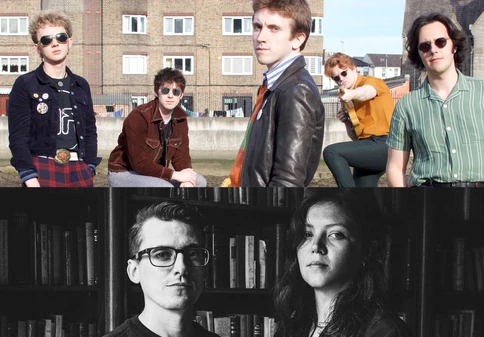