The Busquitos play a very catchy mix of brilliantly played music, sung with an impressive Louis Armstrong like hoarse voice, and dazzling, funny entertainment that will put a smile on everyone’s face! And if the time is right, they will mingle, wireless and play a serenade organize a limbo- or line-dance or get the audience to sing along to one of their catchy jazzy tunes.

Happy swingin’ music for all ages!

Jelle van Tongeren (winner of “The Golden Satchmo!”, Hot Club De Frank)- violin and Thomas Streutgers (winner of “The Big Boss Award”, Big Jay Mc Neely, JZZZZZP, Rude Rich & The Highnotes, The Soulsnatchers)- saxophone . Two brilliant instrumentalists who have been showing their skills on stages all around Europe and beyond…

The Busquitos play a large variety of music that goes back from anywhere as far as the 'roaring twenties' until yesterday. Hot Club, Jazz, Pop Rock&Roll, Classical Music, you’ll hear it all! Songs by Disney, Django Reinhart, the Mills Brothers, Sonny Rollins, and Irving Berlin, just to name a few as well as catchy tunes as Yackety Sax (Benny Hill), The Nanny,… etc etc

And they play their own, very catchy, original tunes too!

2016 will see a first “All Original” Busquitos-Album!

The Busquitos have proven their skills Festivals all over Europe and were reinvited practically everywhere! (f.i. Oerol Festival(NL) Bamberg Jazzfestival, Maschseefest (D), Cork Jazzfestival, Doonbeg Jazzfestival (IE) ). 2013 and 2014 they tour Holland, Belgium, Germany, Ireland, Italy, and Turkey! And even outside of Europe, a 14 day tour in South-Korea, October 2014 and 2015!

2015/2016 they have options in Maleisia, South Korea, Jamaica, Cuba, Surinam and the USA

The Busquitos won “Silver Cap”at a buskers festival in Leiden-NL 2012. Third price at “The Strassenmusikfestival” in Ludwigsburg-Germany 2014. And in 2013 they were voted (by both Jury and Public) to “Best Dutch Streetband” on Dutch National Radio, in 2014 they won the “Prix du public lors de l’édition 2014”” at the Swing In The Wind Festival, Esstavayer Le Lac, Zwitserland 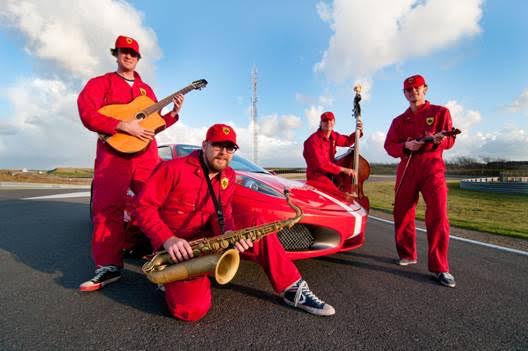