Some Rise Some Fall

Their debut album, Some Climb, is due for release next year, and current single "I'll Take A Melody" with Annette Buckley and Martin Leahy is on release this November. The project is the brainchild of Cork-based music lover Mick Fitzgerald, and honours such musical influences as The Grateful Dead, Ian Tyson, Allen Toussaint and Jorma Kaukonen.

The music is essentially Americana with an Irish twist, and features a host of respected musicians including Ger Wolfe, Hank Wedel, Annette Buckley, and Edel Sullivan, with all tracks immaculately produced by Martin Leahy, who also plays on most of the tracks, and stunning design and cover art by Harry Moore.

The project aims to produce recordings that reflect all facets of the human condition, and all of the artists share a profound belief in the transformative power of music.

SomeRiseSomeFall, as well as being all about the music, is a project passionate about many social issues, including raising awareness of & improving the treatment of asylum seekers in Ireland, and promoting greater awareness and understanding around mental health issues. 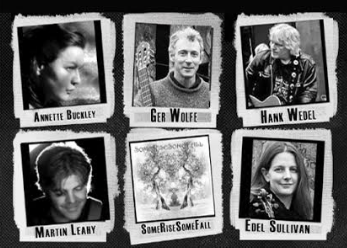