Right Here Right Now 2018 The Frank & Walters, Marlene Enright and Ye Vagabonds play Cork Opera House with the Cork Opera House Concert Orchestra. On Saturday 2 June the audience will be immersed in a rare and specially curated experience as the orchestra under the baton of John O’Brien will perform on stage with Marlene Enright and Band, Ye Vagabonds and Cork legends The Frank & Walters. This unique arrangement will allow the audience to hear the music of these performers in a new and all-encompassing way in the main auditorium. Date: Saturday 2nd June 2018 Time: 7.30pm Age: Strictly over 18’s Tickets: €25* *Booking fees apply to telephone and online bookings The Frank and Walters The Frank & Walters will finally realise a lifetime ambition to perform their songs with a full orchestra. Under conductor John O Brien the Franks will perform songs from across their career. It’s been an eventful few years for the band with the release of their latest album Songs for the Walking Wounded in 2016 and a European tour in celebration of the 20th anniversary of their 2nd album Grand Parade in 2017. 2018 had began with the band beginning work on the next album when, twenty five years after they gate crashed the UK Top 20 with their seminal hit ‘After All’, the track found a whole new audience following a classic television moment on the RTE/BBC production The Young Offenders. As the captives of a lovably psychotic Billy Murphy broke into the indie anthem on a Cork bus, so began the track’s whirlwind ascent of music charts both here and in the UK, culminating in a mid-week position of Number 1 on the i-Tunes download chart. A little more than 25 years to the day since the Franks played ‘After All’ on BBC’s flagship music show, Top of the Pops, the melodic hit once again reminded listeners that good tunes simply never go away. “The Frank and Walters create music as timeless and classic as their heroes The Beatles and Brian Wilson. But it’s their decency and kindness, in a music biz of sharks, that will always endear them to me” – Ken Sweeney. Marlene Enright Marlene Enright’s solo debut, Placemats and Second Cuts, showcases her passions and influences. The RTE Choice Music Prize Nominee wrote and recorded the record over a year, the resulting body of work a melange of the heavy grooves of RnB, the warmth and nostalgia of great folk songs and the richness of thickly layered harmonies. It is the sound of modern roots music, evolved as it has over decades to something that is unmistakably 21st Century, while still carrying echoes of the past. The title, Placemats and Second Cuts, a line from the outro of the album’s closing song, is fitting for this album offers depth and introspection. Enright says, “Hindsight has made me realise that it’s a much more self-reflective album than I initially realised. It speaks of self-doubt, dancing the fine line between feeling comfortable in your own skin and feeling totally lost at sea, indecisiveness, the battle between strength and weakness, passion and apathy, belonging and isolation and self-acceptance.” “brilliantly played and superbly produced…ambitious, free-flowing alternative pop songs….a seriously accomplished debut album” ****The Irish Times Ye Vagabonds Brothers Brían and Diarmuid Mac Gloinn grew up playing music together around their hometown of Carlow, a small town in the southeast of Ireland. After moving to Dublin in 2012, they quickly became a staple of the live music and session scene in Ireland, playing their own original songs as well as folk songs from Ireland, Scotland, England and America. After a chance meeting at Electric Picnic in September 2015, the brothers performed onstage with Glen Hansard, who invited them to open for him on his European tour the following October. Since 2015, they have been busy touring Ireland, the UK and Europe, opening for acts such as Villagers, Roy Harper and Lisa Hannigan. In October 2017 they launched their debut, self-titled album to great acclaim. “Ye Vagabonds” comprises of harmony rich folk music, influenced by Irish traditional music, Appalachian singing, and the 1960’s folk revival. Their second album is scheduled for release early 2018. “They remind me of my first days at ‘Les Cousins’ in Soho in 1965… Ye Vagabonds are a modern expression of a tradition that is truly robust and important to these islands.” Roy Harper 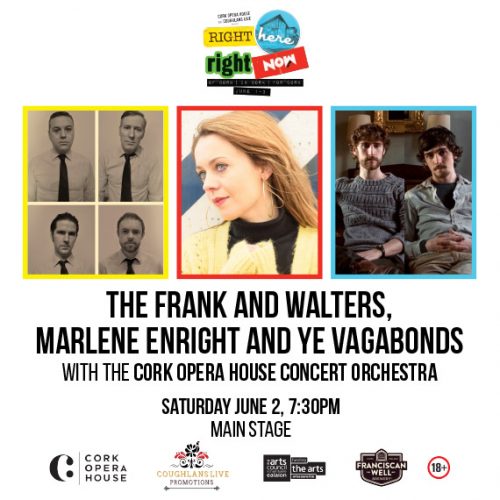