Jack O’Rourke & Anna Mitchell in concert, in the intimate setting of The Right Room, a unique venue on the main stage of Cork Opera House.

Presented by Cork Opera House and Coughlan’s Live Promotions, Right Here Right Now is the festival of Cork and of Irish music.

Cork is a hotbed of creativity and a breeding ground for a huge range of fantastic artists across a multitude of genres. Cork Opera House is proud to provide a stage for local, national and international acts to collaborate together. This festival is a celebration of the music scene in Cork Right Here, Right Now.

The figure of Jack O’Rourke hunched over piano keys or icy synths is something to behold. His wide ranging voice, somewhere between velvet baritone and ethereal falsetto and the unique craft of his songwriting makes him one of Ireland’s most compelling artists. Whether performing solo, with strings or with his incredible rock band, Jack’s honest and raw performances are unique.

Jack’s critically acclaimed debut album, “Dreamcatcher” reached no. 5 on The Irish Album Charts. Jack’s songs are strikingly honest and individual, personal and political. Excavating the worlds of folk, rock, blues, jazz, electronic and even chamber music, Jack absorbs these traditions and fuses them with his own outlook and melodic flair.

Jack’s composition, “Silence” was the anthem for the Marriage Equality Referendum and it won an International Song writing Award judged by Tom Waits, Lorde and Bill Withers, which he performed on a coveted slot on The Late Late Show.

Anna Mitchell revealed the release of her self-titled second album in Ireland in January 2018.

This is an album that Anna has decided to self-title, has chosen to put her name to. It’s something that’s private but comfortable enough to be shared, a personal celebration.

“If David Lynch were to reset Blue Velvet in the wilds of West Cork, then Anna Mitchell’s evocative, dark songs of life and love’s painful kiss would sit well on the soundtrack." — The Irish Times 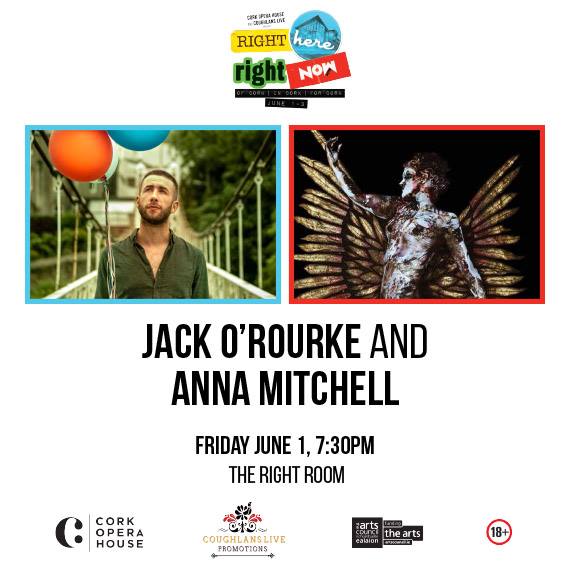