Right Here Right Now 2018 Iarla Ó Lionáird & Steve Cooney plus special guests As part of Right Here, Right Now 2018, Cork Opera House & Coughlans Live Promotions are very proud to present, two of Ireland’s most respected musicians, Iarla O Lionáird and Steve Cooney, in concert, in the intimate setting of The Right Room, a unique venue on the main stage of Cork Opera House. Date: Sunday 3rd June 2018 Time: 3pm Age: Strictly over 18’s Tickets: €20* *Booking fees apply to telephone and online bookings Iarla Ó Lionáird & Steve Cooney Renowned two-time Grammy nominee Iarla Ó Lionáird is best known for his unmistakable voice and distinctive sean nós style as part of the stunningly successful group The Gloaming. For this very special concert his is accompanied by acoustic guitar virtuoso Steve Cooney. Ó Lionáird has carved a long and unique career in music both internationally and in Ireland. From his iconic early recording of the vision song Aisling Gheal as a young boy to his ground breaking recordings with Dublin’s Crash Ensemble and New York’s Alarm Will Sound, he has shown a breadth of artistic ambition that sets him apart in the Irish Music fraternity. Born and bred in Cúil Aodha, in the West Cork Gaeltacht, with Seán Ó Riada as neighbour and an indisputable early influence. Twice Grammy nominated, Ó Lionáird has worked with a stellar cast of composers internationally including Donnacha Dennehy, Dan Trueman, Nico Muhly, Gavin Bryars and David Lang and he has performed and recorded with such luminaries as Peter Gabriel, Nick Cave, Robert Plant and Sinéad O’Connor. His unique singing style has carried him to stages and concert halls all over the world, from New York’s Carnegie Hall to the Sydney Opera House and beyond. His voice has graced the silver screen also, with film credits extending from The Gangs of New York to Hotel Rwanda and most recently as featured singer in the film Brooklyn starring Saoirse Ronan. He is the vocalist with the critically acclaimed Irish/American band The Gloaming. Steve Cooney has been described by the Irish Times as a ‘musical polymath’ and is best known for his development of an influential style of guitar accompaniment to traditional Irish dance music, for which he won the National Entertainment Award in 1997. He came to Ireland from Australia in 1980 and maintains his connections with the Aboriginal culture there, into which he was initiated. He has Irish ancestral links with Tipperary, Cavan and Galway. He has participated in making more than 100 CD’s, either as a guitar or bass player or as producer and engineer. A poet and songwriter, he has worked with many iconic international artists from rock and roll and country music but his primarily focus is Irish traditional music. He is a guest lecturer in a number of tertiary institutions and has invented an innovative system of teaching music to children, for which he is studying for a PhD. Seamus Heaney wrote at the Fiddler’s Green Festival in Rostrevor: ‘Master Cooney restores the ancient link between lyre and lyric, between poetry and performance, the rhapsody and rascality’. 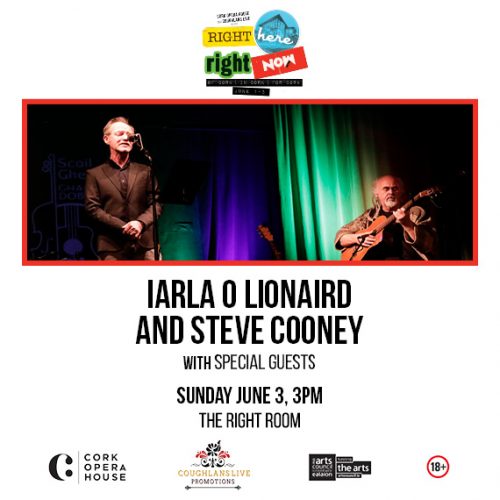