I had finally tracked the drummer Karl Wright down and the bassist Tim Zambonifunk. Now I was meeting them for the first time at a rehearsal room in the East Village called Rivington Street. While sitting nervously at a table waiting for the room to be free, a rugged man in a khaki shirt and grey workman’s trousers and tossed grey hair, sauntered towards me, was this Karl? who else could it be.

He had a smoky tenor voice, I knew he could sing, and he does. I explained to him why I wanted a Jamaican rhythm section on my new album. He looked slightly puzzled, but he was taking it all in. The last time I was that nervous was when I guested as a DJ for RTE One, what would these guys make of these Irish folk songs?

“Have you heard about Cromwell sending Irish adults and children to Jamaica?” he shook his head “nah”

“Well, you can google it. 25% of Jamaicans are of Irish heritage, and I believe that you can hear Irish melodies in a lot of reggae”

“Jamaican’s are a little bit of all kinds of things” “But I have always thought the Jamaican accent sounded like a Cork accent, that’s a county in Ireland”

The album Vinegar Hill is the end result of this encounter between Irish singer songwriter Pierce Turner and the drummer Karl Wright; ‘Folked With’ Irish folk songs by Pierce Turner. Many of these songs you will know, and if you know Pierce Turner’s sound, you will know that this recording turned these songs into Pierce Turner’ songs. Irish people are ready to hear these songs again, ready to sing along with them, and dance to them, this is a party album, and it is going over a storm live, a great addition to the extensive Turner repertoire.

"Easily one of the most important Irish artists of the last twenty years". The Irish Times 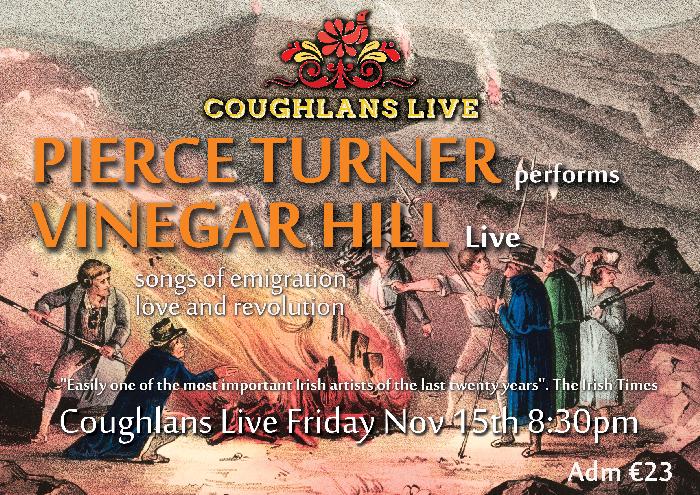