Mick Flannery and Band Live At St. Lukes (Sold Out)

You can make an album like “By the Rule”, for instance. It’s Flannery’s fourth album but it’s a world on from anything he has put his name to before now.

We can now consider the apprenticeship to be over. “By the Rule” is the work of a confident, assured songwriter, someone who knows how to turn a list of nouns, adjectives, verbs and adverbs into graceful, minor-key pen-pictures and poetry which will resonate with the listener.

Beneath and beyond the beautifully understated, uncomplicated and uncluttered production on “By the Rule”, Flannery’s songs usher us into a world which is by times emotional, romantic, dark, insightful and hopeful.

It’s a world he brought into being in Berlin. He took a notion to go to Germany and, after a bitter cold winter initially beat him home again, he settled and spent seven months there in 2013. In a flat with big, open rooms and lovely acoustics, Flannery set up base and went to work.

He was largely by himself in the city. He did a college course to learn the language, but there was no social circle or gigs to distract him. He’d wander around that great city, taking in the history and grandeur and pace of the place.

Occasionally, he’d throw on a pair of runners, stick Eminem on the headphones and go for a run. “There’s things he does with words that no-one else does”, Flannery says of the Detroit rapper. “He rhymes two words with one word, the two syllables of one word with match two separate words, internal rhyming, skip rhymes.”

Back at his little room in Kreuzberg, Flannery’s new songs began to slowly take shape. His songs are usually based on stories and experiences he has heard from people or overheard in the clatter of a café or bar.

“I’d be a bit of a detective about people, the way they are, how they behave. You have to care about them. If you only want to write about your own experiences, your own break-ups and trials, you can do that without leaving the house.”

The compelling strengths of “Pride”, “Get What You Give” and “Live In Hope” benefited from Flannery’s methodical approach to getting the lyrical dimensions just right. “It takes me a while to pare them down and get the lyrics correct and make everything as concise as possible. You have to think about the songs again and again and again. You have to have a foothold in the song.”

Back in Ireland, the next job was to record the songs. Flannery called on O Emperor’s Phil Christie (piano) and Alan Comerford (guitar) to give him a hand and liked what they were doing in rehearsals. “They were finding things in the songs and I thought the things they were finding were nice.”

Flannery knew the sound he wanted and that meant less rather than more playing. “The most effective thing to me is a dynamic when something just swells and gets louder and tenser and effects the listener. There’s no need to play a lot of notes to get that. It’s simple stuff, really.”

A few months on from recording, Flannery is still digging what he and the band produced over that winter fortnight. Unlike his other albums, he an imagine himself listening to this one for many years to come. He likes the way it was recorded and the way it sounds.

He likes the way he sounds too. “I sound like myself here. I’ve been trying to get away from singing with that old American twang which is left over from listening to too much Tom Waits. The more I get away from it, the more comfortable I feel.”

This satisfaction with “By the Rule” could also be about the growing up process. Flannery turned thirty last year and finds he’s less bothered than he used to be by the small stuff. When you get to this age, you’re happy to let the small stuff go.

“When you get to the end of your twenties, you become less self-obsessed. You start worrying less about your feelings. You become calmer. It gradually becomes easier to be yourself.” 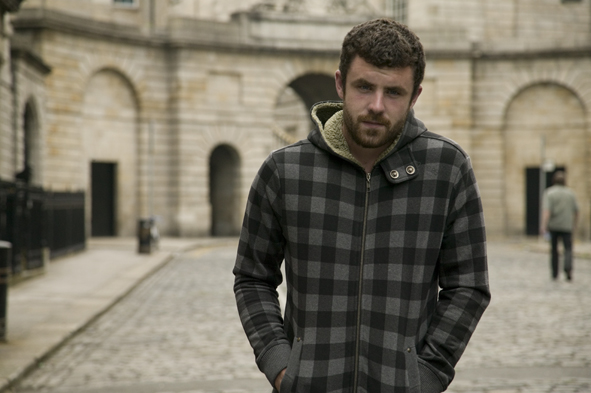