Ireland’s Mary Coughlan is arguably the greatest female singer to have emerged from Ireland in recent times, the equivalent of Irish vocal royalty. The word ‘legend’ is not one to be used lightly, but in this case is entirely appropriate.

“Dubbed as Ireland’s Billie Holiday, Mary is a jazz & blues singer whose life story gives weight to the truth that the best singers are the ones with the most painful lives” (The Guardian). Whether into folk, blues or jazz, no one can fail to be moved by the emotional depth, expression & power in her voice, forged from an extraordinary life.

Born in Galway 60 years ago, Mary has battled and overcome childhood trauma, near-death from alcoholism and drug addiction. After hitting rock-bottom and extensive periods in psychiatric hospitals and rehab centres, she literally pulled herself out of the dregs of a vodka bottle to confront the foundations of her problems head- on and sort out her life, and has been sober since 1993.

Mary has carved out a timeless and highly regarded career, with a legion of devoted fans worldwide. Her ability to connect so emotionally & empathically with both the song & her audience is testament to her inner strength, and to the power of transformation & redemption. The stage is her home. To hear Mary sing is truly to be at the core of the human heart.

Since her first album ‘Tired and Emotional’ rocketed her to overnight fame in 1985, she has recorded 15 further solo albums, most recently the searing song cycle ‘Scars on the Calendar’ with Erik Visser. Throughout the 90’s, Mary was selling out some of the UK’s most prestigious venues, including the Mean Fiddler, London’s Astoria and the Liverpool Philharmonic. She has since gone on to tour in the US, Australia, New Zealand, Europe, Scandinavia and the U.K.

Her theatrical version of the visceral 2008 album ‘The House of Ill Repute’ was performed to great acclaim in Dublin as part of the MusicTown Festival. Mary has acted in films and has also written a moving, remarkable and candid autobiography called ‘Bloody Mary - My Story’ which is now in its third pressing.

Throughout 30 years of her quite extraordinary life and recording career Mary has drawn heavily from her legendary heroes: the grievous, teary outpourings of Billie Holiday (to whom she devoted a double album of her songs), the husky flirtations of Peggy Lee, Van Morrison’s soulful wails, the defiant chanteusery of Edith Piaf. All are present and correct in her delivery. Even so, Mary, with her naked honesty makes every song her own; they belong to her and nobody else.

Mary live is in a league of her own and always has been. Peppered with her dry waspish wit and no-holds-barred ribald banter, her songs resonate with life experience, her husky voice pulling every ounce of emotion from the music. That unmistakeable smoky, bluesy, boozy drawl has always been a seduction, no matter what the subject. Even in the early years of her career, Melody Maker wrote “A song is not complete unless it has been sung by Mary Coughlan.” Sad, sassy and droll, melancholy has never sounded better.

There is no hint of manufactured, derivative or homogenised music in Mary’s repertoire. This is the real thing, sung from the depths of a woman’s heart and soul, a survivor who (to paraphrase Leonard Cohen’s famous words) “was born with the gift of a golden voice.” This is why she is so loved.

One thing is for sure, you will be taken on a journey of devastatingly beautiful, wide-ranging and engaging songs, from a woman who has battled her demons and won, transforming them into art, an enduring testament to Mary Coughlan’s seemingly timeless and endless brilliance. As the Observer rightly said, “Mary Coughlan’s talent is awesome.”

Come & witness Mary for yourself - one woman, one amazing voice, and the truth.

“The emotional purity in Mary Coughlan’s songs is so fragile that it is possible to become inconsolable when listening to her in a darkened room.” Q Magazine

“A song is not complete unless it has been sung by Mary Coughlan.” Melody Maker

“Her talent is awesome.” The London Times

“Mary’s live performances have to be seen to be believed.” NME 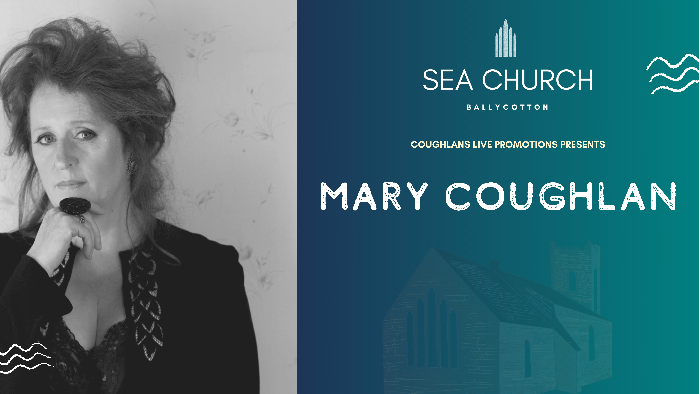