Cherished and admired in equal measure by listeners and fellow musicians, award-winning guitarist, singer, songwriter and prolific collaborator Kris Drever has been a leading light on the UK roots scene for well over a decade.

A highly skilled guitarist who adroitly blends traditional folk and flat picking with more contemporary influences – allied to a distinctively relaxed and poised vocal burr – Drever is an astonishingly fine interpreter of others’ songs, with an increasingly frequent knack for concocting seriously smart lyrical observations and earworm melodies of his own.

Having grown up in Orkney, after leaving school and moving to Edinburgh he discovered the city’s thriving session scene in the early 2000s. After touring with numerous traditional acts his own profile flourished as part of revered folk experimental trio LAU and following the release of his much-loved debut solo LP Black Water in 2006.

An album in collaboration with Idlewild frontman Roddy Woomble and fiddler John McCusker, Before the Ruin, and a second solo album, Mark the Hard Earth, came soon after along with a steady stream of collaborative releases including last year’s visionary, nature-focused Spell Songs project.

LAU have released a succession of acclaimed and adventurous records with esteemed producers including Race the Loser with Tucker Martine (The Decemberists) and Midnight and Closedown with John Parish (PJ Harvey). All of his LAU and solo work has been released on Tom Rose’s Reveal Records label.

The title track to Drever’s self-written third album If Wishes Were Horses, released in 2016, landed him a BBC Radio 2 Folk Award. The percussive talents of Admiral Fallow frontman Louis Abbott, consummate double bassist Euan Burton and the endless ingenuity of Denmark-based guitarist Ian Carr provided the backdrop for a crisp-sounding indie folk record he had been building towards for several years.

That trio of musicians are again the nucleus for follow-up Where the World is Thin, due for release in October 2020. The musical arrangements remain simpatico to the songs, while the addition of John Lowrie on keys, Rachel Lightbody on harmonies and outstanding Nashville-based fiddler Christian Sedelmeyer help ensure the 41-year-old’s sound continues to evolve.

Eight of the nine songs are Drever originals, albeit one (Strike the Colours) was written by his talented younger brother Duncan, while he also tackles Robert Burns (Westlin Winds).

The title track finds him residing in a sweet spot somewhere between Scottish folk and twinkling indie-pop, while there is a semi-anthemic defiance in More Than You Know’s reassuring refrain.

Where many of the songs on ...Horses fixed their lyrical gaze on personal matters, here the source material ranges from the scuttling of the German fleet off Orkney at the end of the First World War (the meticulously researched Scapa Flow 1919) to the Twitter feeds of friendly comedians (Hunker Down/That Old Blitz Spirit).

After a few years spent living in Shetland, in 2019 Drever relocated to Glasgow with wife Louise and their two young children – in part to make it easier to fulfil his touring commitments. Now Covid-19 means no one in his industry –reliant on live gigs for income more now than ever before – knows when they might tour again.

“We don’t even know if we’re going to get to go back to work in the way that we have done for hundreds of years. Nobody knows when they’re next going to be able to do a gig, so everyone is scrambling for some high ground where they can see what’s happening.

“‘People need art’ is something that’s been said lots and the cynical part of me goes ‘yeah, not as much as food though’. But it is true, otherwise it’s just existing. There’s existing and then there’s living, and living contains a lot of art.”

Resisting the urge to despair at the degeneration of UK politics into selfishness and bigotry, Drever sees embracing human kindness as an almost subversive act.

“We’re in a crazy situation now where one of the most rebellious things you can do is be decent to people! The individuals at the top of our tree are so horrible that being kind to others, or even to yourself, is kind of like two fingers to them.”

“The folk revival has a new standard bearer” — Q Magazine

“Guitarist with that bravely experimental trio Lau, Kris Drever has all the makings of a solo celebrity” — THE GUARDIAN ****

“It’s no coincidence that ‘If Wishes Were Horses’ has been compared to the works of some lauded singer-songwriters, Richard Thompson, Loudon Wainwright III, Josh Rouse and Ron Sexsmith. This latest release is a triumph that confirms Kris Drever’s place among the best of the best. It’s not a solo album made while taking time out from LAU, in terms of songwriting this is the most mature and dazzling thing that Kris has produced so far” — Folk Radio UK

Louis Cormack writes vulnerable and touching folk songs with a murmur of melancholy that explores his personal relationships.

From an early age, Louis taught himself recording techniques through the use of an old Apple Mac G4 computer, a free version of ProTools 7 LE recording software, and a MBox Mini audio interface. Tucked away in a shed at the bottom of his parents garden built by his dad, insulated with carpet and polystyrene, Louis recorded his own songs as well as friends, learning how to play multiple instruments and understand song arrangement and production. Many years of studying music, sound engineering and writing songs followed, and it wasn’t until he finished his music degree in 2018 that he felt in the right place to release some of his songs…

Black Water is an unfiltered album of raw material. Recorded live to a Revox A77 2-track Reel to reel tape machine, this format leaves nothing hidden and delivers organic emotion to your ears.

“At the time I was binge-listening to Springsteen’s Nebraska album and I loved the sound of it. That had a big effect on how we approached the recording process. We wanted to capture the songs in a way where the listening experience would feel as alive as possible like you could hear the furniture in the room kind of thing. And the songs were young and vulnerable, which is how I wanted my first album to be. I imagine looking back on it in years to come thinking that sounds like me at the time.”

” There are a few reasons why I called the album Black Water. One of which is the Blackwater River here in Ireland, which starts in Kerry, cuts through North Cork and meets the sea in west Waterford. An area steeped in history yet so much of it overlooked, with little effort to preserve or restore. I have come across a lot of hidden treasures in the Blackwater valley, it’s a great place to go for an adventure. Just before the key was turned on the lockdown, me and Rory went to the source of the river which was a pretty cool marshy place. And by the first bridge over the Blackwater stands a solitary house decorated with ancient black bog oak scattered around the garden.”

A year after the release of Black Water and eager to perform, Louis created a YouTube series called Live from the Van. The series began by recording each song from the album live from his self-built van and developed into a unique and portable way of recording local artists in a location of their choice.

Currently, Louis is working on his second album with acclaimed songwriter and producer Boo Hewerdine and recording engineer Mark Freegard in Glasgow. He is also preparing for his first headline tour of Ireland in July 2022. 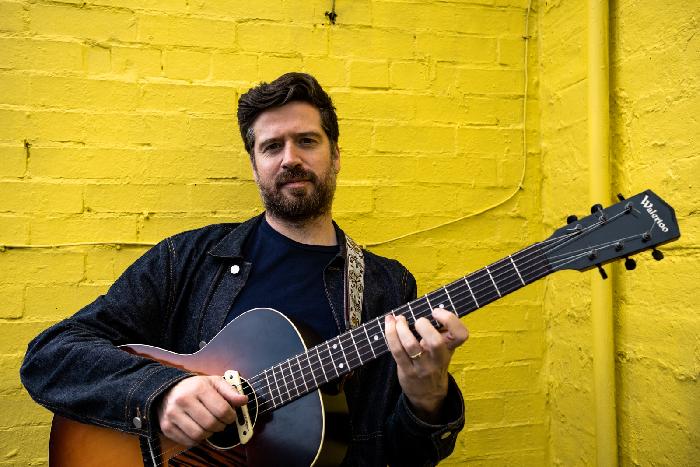