JOHN NEVILLE is a native of Cork city and has never wanted to live anywhere else. He bought his first guitar, a small bodied Fender acoustic for £52 from the late Mick Crowley in Crowley’s Music Shop on MacCurtain Street in Cork, Ireland.

His early music influences were from the American folk tradition. He also took a keen interest in old timey and bluegrass after hearing the Lee Valley String Band perform in Heaphy’s, Union Quay on Monday nights, later to become the famed Lobby Bar music venue.

His first feel for Irish music was at a Bothy Band concert in Connolly Hall, Cork in 1978. He was in awe of the power created by the entwined rhythms of the harpsichord, bouzouki and in particular the guitar of Mícheál Ó Domhnaill. That tuning and style (DADGAD) would influence him for the rest of his musical career.

He has been a long term active contributor to Cork’s vibrant music scene.

He was a founding member of the band North Cregg, which provided a platform to tour internationally, record and do a share of radio and TV work. It was also a chance to perform some original songs amongst well loved favourites to a wider audience.

His tragic song The Wobbling Man received an acclaimed mention in the New York Times by the writer Jennifer Finney Boylan in her piece, Ireland’s Transition, and Mine (18th October 2017), after a trip to Cork where she had previously lectured for a period at UCC in 1998.

He has provided the out credits music for the TV documentary series Cork Mega Port (2015) filmed by Goldhawk Media for TV3. The music in the form of a song Handsome Stranger concerns the power, tragedy and wonder of the sea.

He has an innate ability to rhyme words. Put this together with a well chosen piece of music, a tale to tell and you have the consummate storyteller.

John released his first solo album Dance With the Wind in 2017. He is currently working on a second album with plans to start recording in 2020.

Niall Toner – Author of the book “The Nuts and Bolts of Songwriting” and presenter of RTE Radio One’s Roots Freeway (1 February 2020):

“I think he’s up there with John Spillane and Ger Wolfe and Jimmy McCarthy, and all those great singer-songwriters who come from that part of the world.”

“…the song had hit me like a knife in the heart.” 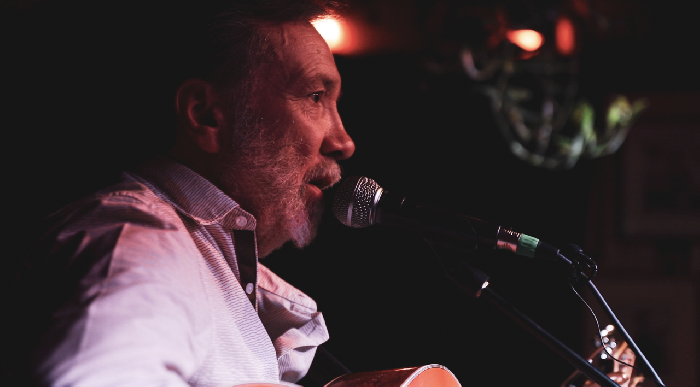