Anita Williams was destined for the stage; at Montfort Stage School - Cork City, she was the star performer taking lead roles in several musicals. She graduated in acting, speech and drama from LAMDA (London Academy of Drama and Acting). Her 13th birthday marked a turning point as she played Billie Holiday album, Lady In Satin; a birthday gift she received. She was transfixed by the strange melodic harmony sung with powerful yet emotional voice. Hypnotized by the sounds of "You’ve changed', she found herself sprung into a world of Jazz.

At 18, Anita traveled to London to train with Glynn Jones, known for training Annie Lennox, Shirley Bassey, Patti La Pone and several West End vocalists. Under his influence, she pursued a career in Broadway before returning to Ireland to audition at Dublin Academy of Music under Veronica Dunne, renowned opera coach. She was set to attend the Julliard Music Center in New York City but life took a different turn, instead she remained in Ireland to raise her two children.

Anita ventured as a fashion presenter on TV3 and entertainment correspondent for Ryan Tubridy and Dave Fanning radio shows. Here she rediscover her love affair with Jazz thus returned to Dublin to study Jazz improvisation at New Park School of Jazz. In 2008, she met a saxophonist from Baltimore, USA and formed a new band "Anita Williams & Rouge", rformed at venues including Glucksman Gallery UCC, Opera House, Cork City, Speigle Tent, The Pavilion, The Button Factory etc

Between 2012 and 2018, she relocated to Dubai and has since worked with talented musicians at the city's most exclusive receptions including World Perfume Award, Burj Khalifa; The Middle East Fashion Award, The Ritz Carlton; The World Diamond Exchange, Palm Jumeirah, Dubai. While Anita still resides in Dubai, she continuously receives invitations for international performances. Advocating Jazz, she pioneered Sunset and Breakfast Jazz events in Dubai, a celebration to bring the music closer to the people

Anita fell in love with Singapore and relocated there in September 2018.

Anita believes Jazz found her; its passionate and heartbreaking ballad continues to overwhelm her to this day. She attributes this romance to legendary Billie Holiday and Judy Garland who have unconsciously helped shape her musical style. With eclectic sounds and musical narratives, Anita leads her band to deliver exquisite melodic style with unforgettable charm. She is now recording her debut album set for an official release later this year. 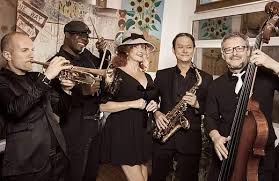