Coughlans Live Promotions presents Booka Brass Band & Special Guests, Midnight show 11:30pm - 3a.m. Booka Brass Band have become something of an enigma. What started out as a group of young music students shyly addressing a bar full of revellers, has unforeseeably become an 8 piece band of professional entertainers and craftsmen, capable of not just grabbing and holding the attention of thousands of fans in a festival tent or at any number of their sold out shows throughout 2014/15, but leaving them with something that they are not about to forget quickly. The band are made up of 8 characters, each with a different story to tell and each bringing their own brand of enthralling stage presence that make Booka Brass Band impossible to take your eyes off once they hit the stage. 2014 brought them a year of success that was well deserved as it was unexpected even for them. The band have seduced audiences from main arena shows at Electric Picnic, Glastonbury, main stage at Body and Soul to their sell out debut shows in Dublin’s Button Factory and Vicar Street along with their sell out debut Irish tour last March. They have collaborated with artists like The Frames, Lisa Hannigan, James Vincent McMorrow, Paul Noonan, We Cut Corners, Jerry Fish, to name just a few as well as played for President of Ireland in his home, Áras an Uachtairain. They were invited to play at Other Voices. They have played with Imelda May, Hypnotic Brass Ensemble, The Hot 8 Brass Band and finished off the year to a sold out Vicar Street crowd on New Year’s Eve. 2015 brought the launch of the band’s debut EP, followed by a sold out Irish tour to support the release. The band turned away over a hundred fans from their debut sold our Cork show and finished the tour with a sold out show in one of Dublin’s most prestigious venues, Vicar Street. Booka Brass Band are getting ready for another massive summer with UK and European Festivals throughout the summer along with guest shows with The Frames, main stage Forbidden Fruit and lots more to be announced. “Something magical happened at the Button Factory last Friday night. When fans of Booka Brass Band assembled in the venue for their late-night show, they had no idea that they were there to bear witness to a gig more awe-inspiring than Dublin had seen in months. Even though many had seen them play live before, nothing could have prepared us for the sheer brilliance of Friday’s set.” – InDublin.ie ‘Booka Brass Band have every right to be claimed as Ireland’s best live act right now’, – Golden Plec ‘If you can only take in one new act this festival season, make it Booka Brass Band’ – The Irish Independent “Massive Attack may have been the big draw of Sunday night and they didn’t disappoint ….. however little did anyone know but the performance of the whole weekend was taking place on the festival’s smallest stage, the Speakeasy Dirty Old Town. Booka Brass Band, Ireland’s only New Orleans style eight-piece brass band are undoubtedly a “have to see it to believe it” type of act. A range of high energy self-penned tunes combined with quite incredible covers of Jason Derulo’s Talk Dirty and Beyonce’s Crazy In Love have those in attendance screaming for more as they leave the stage. Alas, stagehands said there was to be no more and so after much protesting, Booka Brass took the crowd out into the fields and continued playing into the night. It was a moment which summed up Longitude in one foul swoop.” – In Dublin Hot Press Magazine 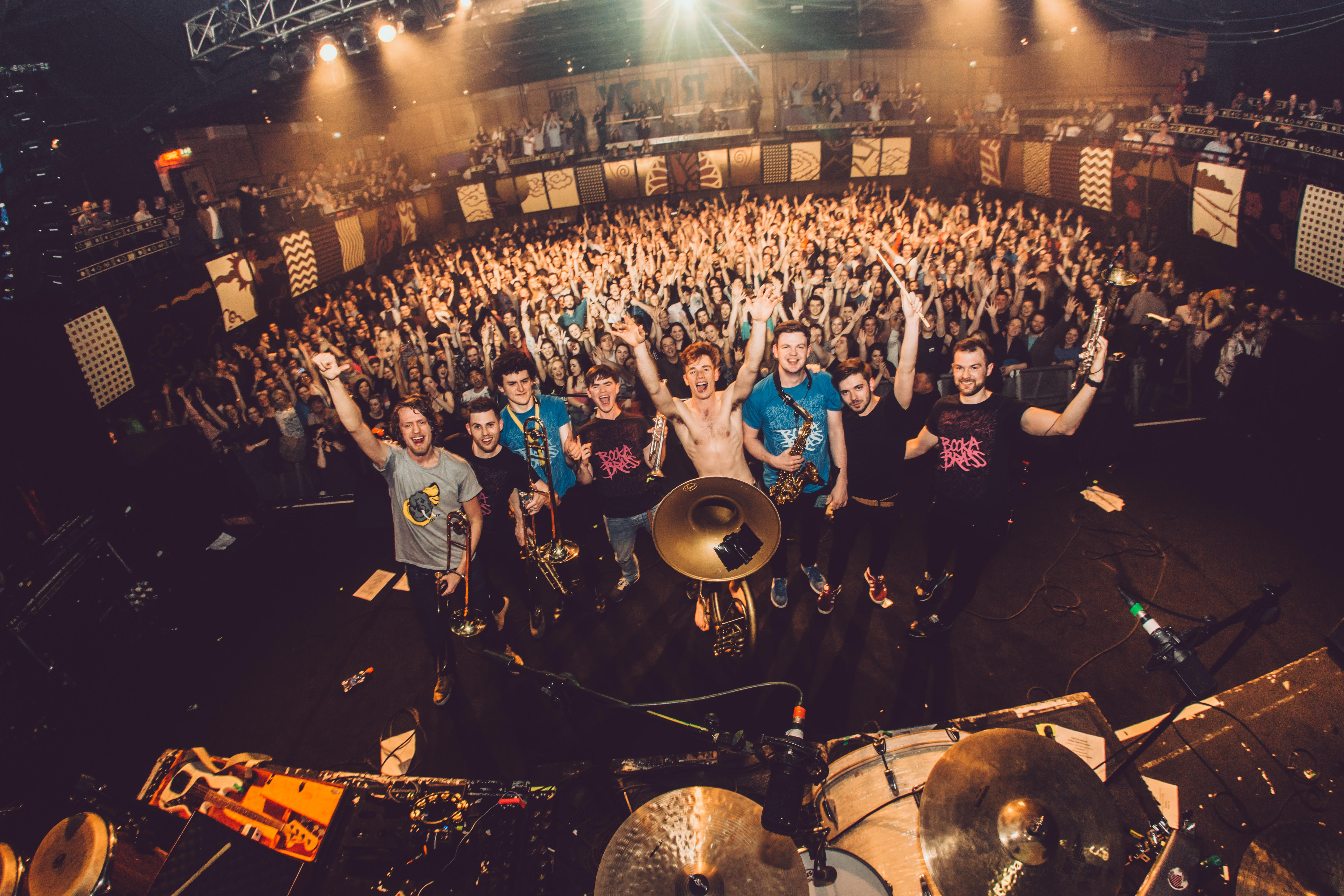