Booka Brass Band have developed their sound and set up over the last twelve months through a succession of great opportunities, all well-deserved and well executed. They have also grown in size, now containing seven members consisting of two trumpets, two trombones, saxophone, sousaphone and drums. With six band members still full-time students, they also stretch the length and breadth of the country coming from Cork all the way to Belfast. 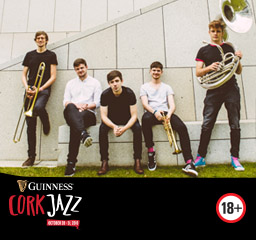