He is, variously: The professor toiling away to engineer something; The busker singing for his supper; Mr Swagger on the Letterman show/Mr Self-Conscious thinking himself into knots; Wise elder statesman of Ireland’s cultural landscape; A babe in the woods eversearching for answers.

There’s no point trying to sew Paul Noonan into any of these costumes. What fits him today might not look so snug tomorrow. And what’s more, that seems to be the way he’s preferred it over the last 20 years.

Take his very first musical incarnation as a nine-year-old flautist in the Lucan Concert Band. It’s 1983 and all it takes is a visit to rehearsals one day from a drummer and his drumkit. Bye bye flute.

Some years later, just as he and his musical brethren at Salesian College are settling into the idea of “Paul Noonan: Rock Drummer Supremo” with Dublin indie darlings Juniper, another upheaval. A sudden Damien Rice-shaped hole ushers him out from behind the skins to the mic stand.

And those years in between? They saw a bridge built between the boy and artist. Teenage oscillations from daydreaming fan to frowning novice, at once both decorating his room with his

parents’ ‘45s and trying to actualise music in his head onto cassette tapes. The son who watched his headmaster father diligently pick out records to play for his pupils, the significance of it calcifying only years later as Noonan’s own children dance around his Dublin home to “The Great Defector”.

It’s probably just as well that he ended up in the perfect day job. Bell X1 have consistently marked the point on the Irish music map where pop and alternative collide with guile, intellect and heart, single after radio-ravishing single. Evergreen shelf-lives are hard to pull off in the fickle music industry these days, but it can be done. For David Geraghty, Dominic Phillips and their frontman, playing away from home is not only allowed, it’s encouraged.

Over the years, there have always been the moonlighting stints behind the drum kit for various talented friends because despite all the tours, all the countless multitudes of pleased faces looking back night after night, the stool and sticks remains Noonan’s natural habitat. Have rhythm, will travel.

When Printer Clips washed elegantly up on shore in 2011, it made perfect sense – a Noonan-helmed vessel carrying Joan As Policewoman, Martha Wainwright, Lisa Hannigan and other sirens. No one for a second mistook it for the end of Bell X1. It was just Noonan going where he needed to go. Mind you, as the 43-year-old readies the release of Push Puppet, his debut solo EP, things are a little different. When Noonan sits down in his writing room in Dublin’s National Concert Hall each morning, it is with the discipline and focus of its previous occupant, a university professor. What may have begun as “goofing off” with novel equipment and a beats app called FunkBox is now a new vehicle starting its engine. With it, however, comes the burden of being the sole navigator. 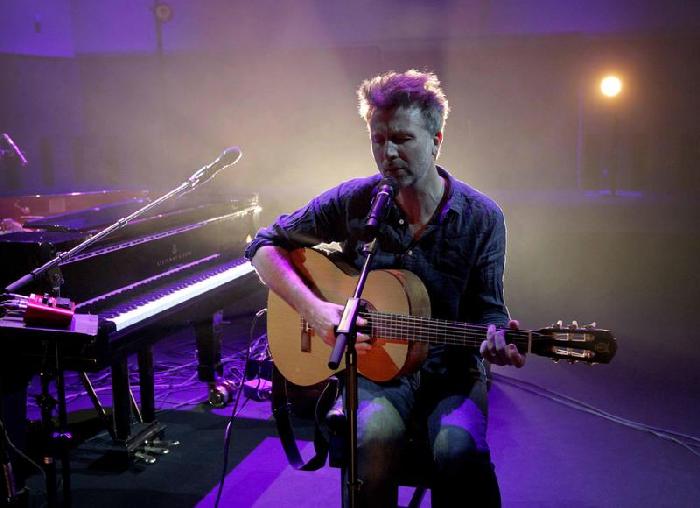