They have wowed festival audiences from All Together Now, Cork Folk Festival, the Galway Fringe to The Baltimore Fiddle Festival. Their single releases have been popular with listeners to RTE Radio 1, 2FM, Lyric FM, Today FM as well as numerous local stations throughout the country.

Cork folk ensemble Blind Poets are currently finishing their debut album and are set to release a number of singles over the coming months. They are excited to embrace another year as a musical ensemble.

Fine song-writing, gorgeous traditional arrangements, skilful musicianship and five exceptional voices characterise this band. Rooted in folk but unafraid to cross genres, it's no exaggeration to say Blind Poets are doing something new in Irish music.

We live in a Golden Age, but shall we live to witness its destruction?

New songs reflect our conflicted time, from liberated joy to existential woe. Questions permeate, voices swell in the ether and harmonies linger like a ghostly presence.

Niamh Murphy (formerly Foxglove) leads the show on piano and vocals. John Creedon says she is “among the cream of the current crop of Irish female vocalists”, while Hotpress described her as “Ireland's hottest emerging music talent”. Niamh's melodious, original songs are the heart of Blind Poets' music, ranging from textured, resolute anthems through moving ballads, to foot-stomping tunes.

Katie O'Neill trained in theatre but has found her passion in music. Blessed with the purest of voices, she can harmonise naturally but if a song requires a singer to lead from the front, Katie delivers it with touching emotion.

This unexpected emergence is part of the diversity of a Blind Poets gig. Striking vocalists are everywhere.

Leo Mullane is well-known for his virtuoso guitar skills, but with Blind Poets his songwriting and warm voice are integral. Leo's solo work includes the 2018 album 'Inasense'.

On violin, synths and vocals is Karen O'Doherty. Aside from long-time collaborations with Mick Flannery and the Fleischmann Symphony Orchestra, Karen has contributed to hundreds of recordings as a session musician and as a producer, most notably in her own studio, Quantum Thief.

Tom Jordan brings another strand to the group as vocalist, clarinettist and co-writer. His sonorous tenor range compliments the other voices perfectly while weaving clarinet melodies blend subtly, until they break out and soar like a genie from a bottle.

Martin Leahy, a multi-instrumentalist known for his work with John Spillane, Ger Wolfe and Greenshine, regularly joins the group on drums. He is recording and producing the band's debut album in his West Cork studio. 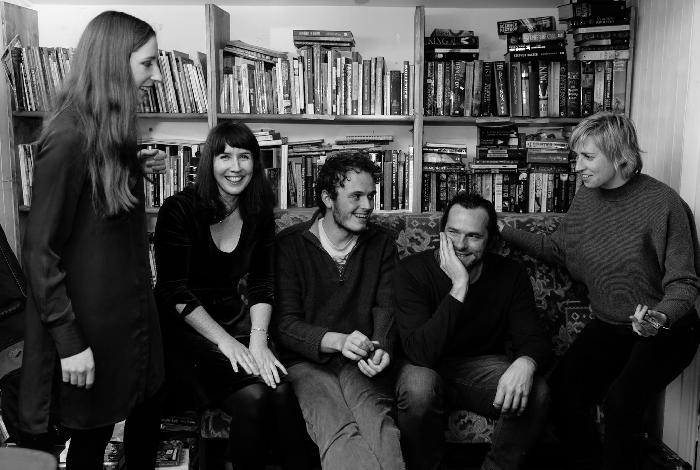